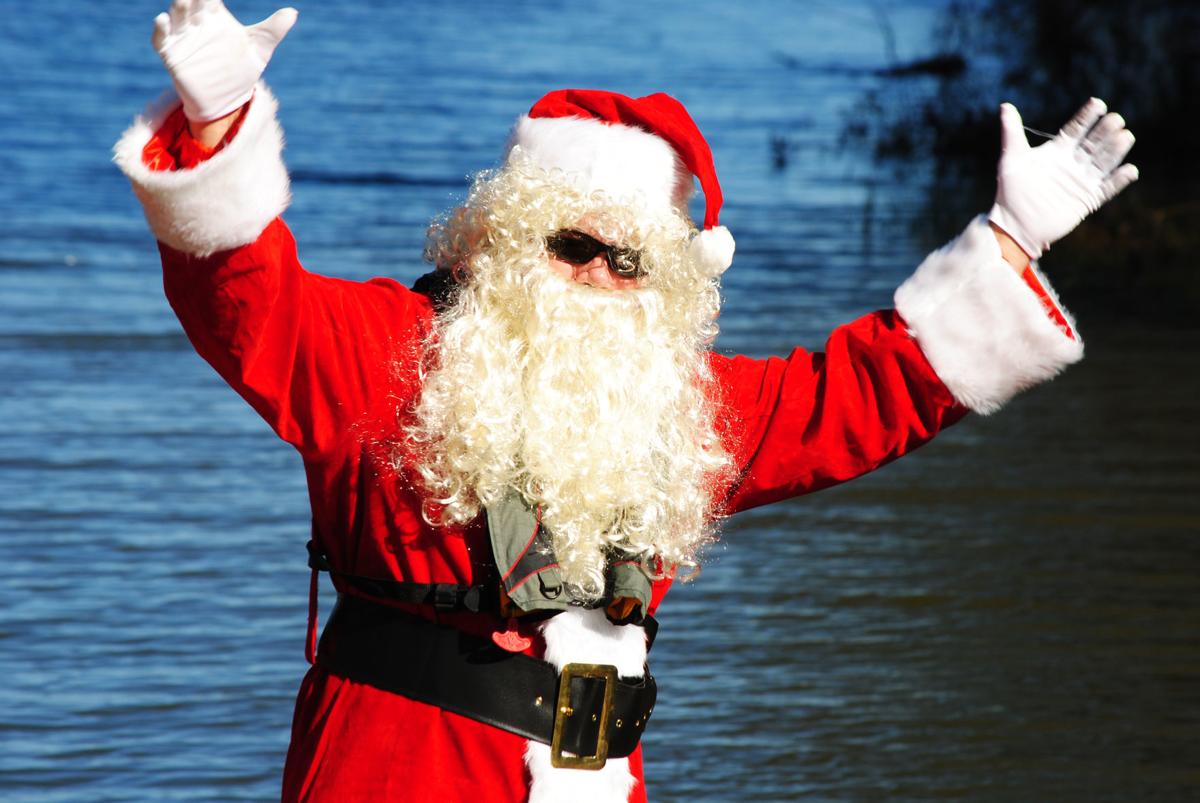 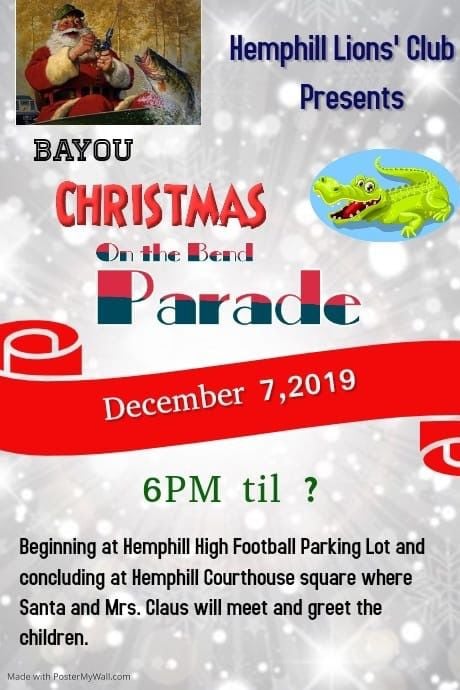 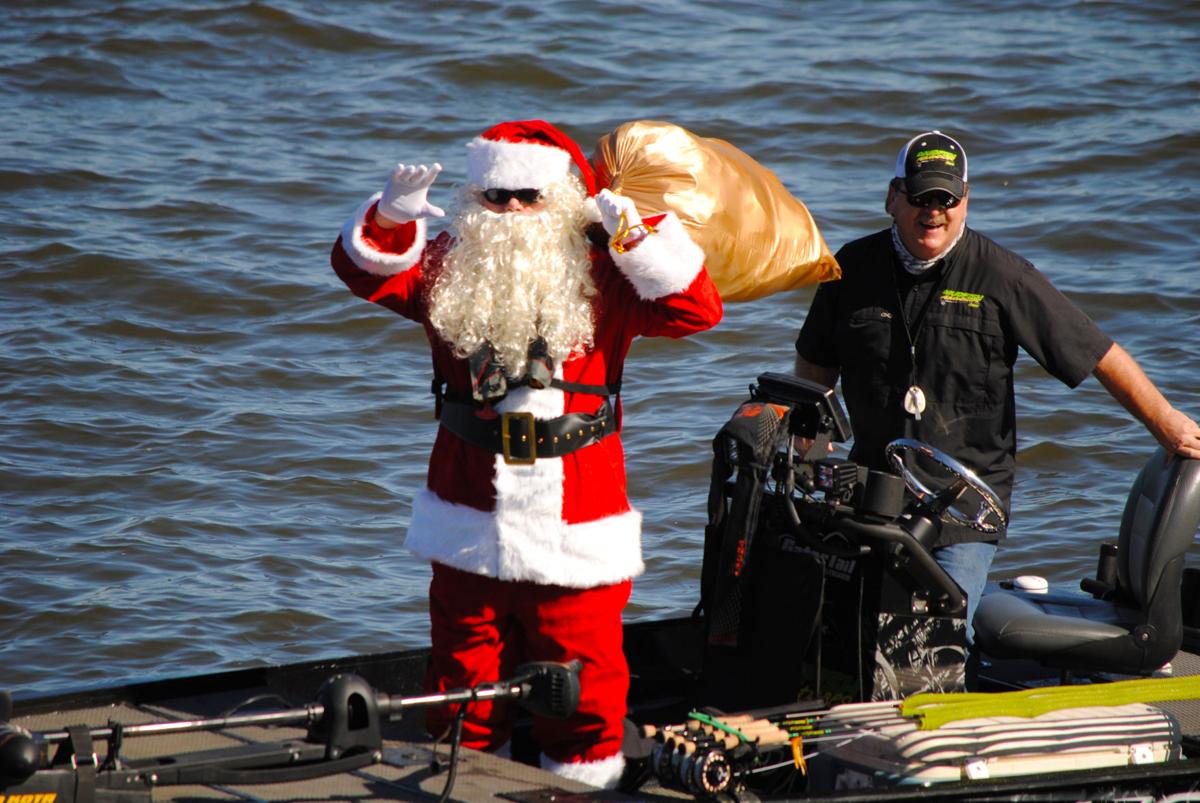 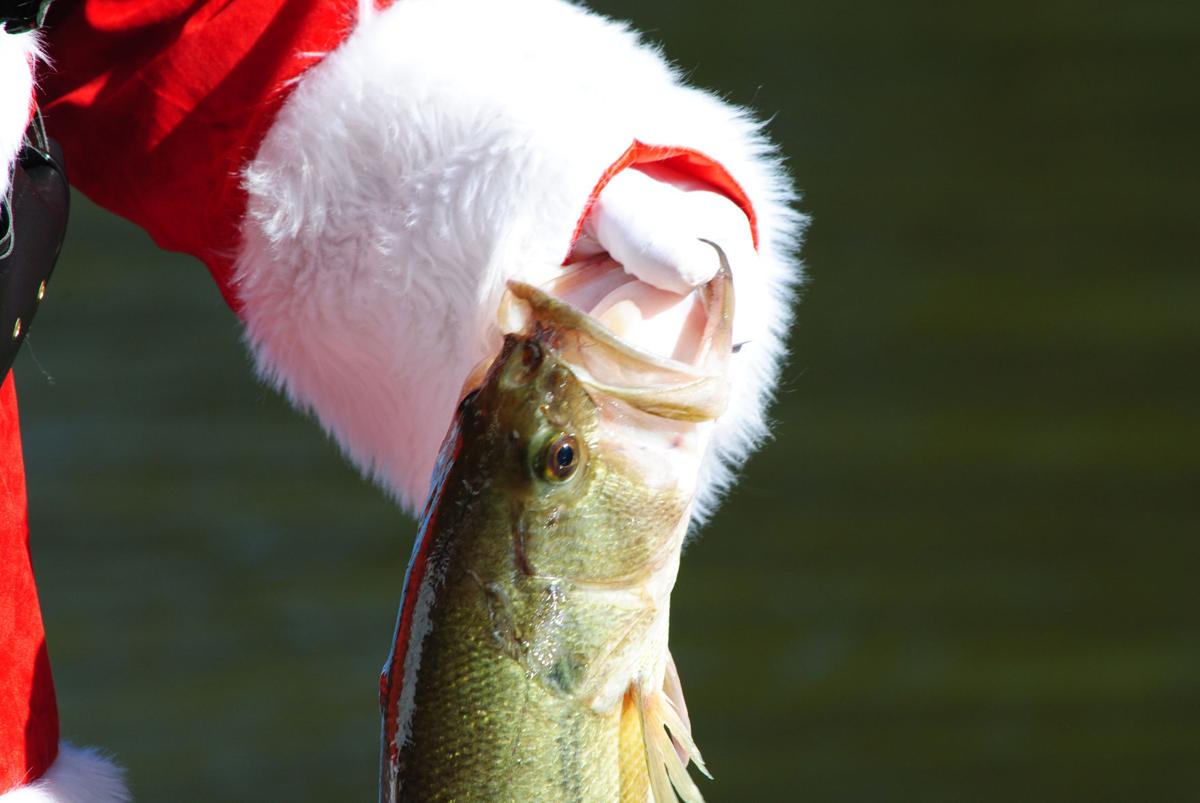 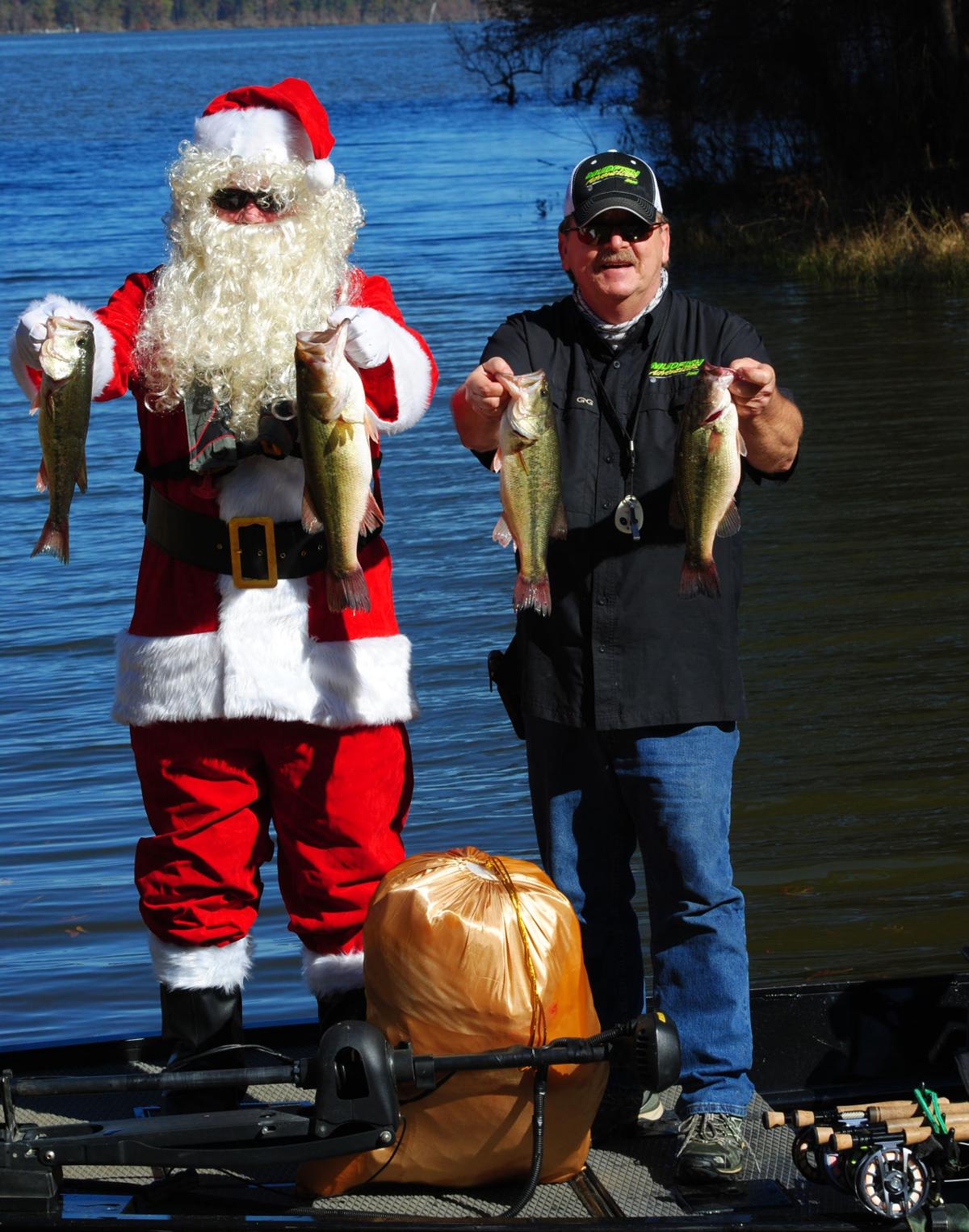 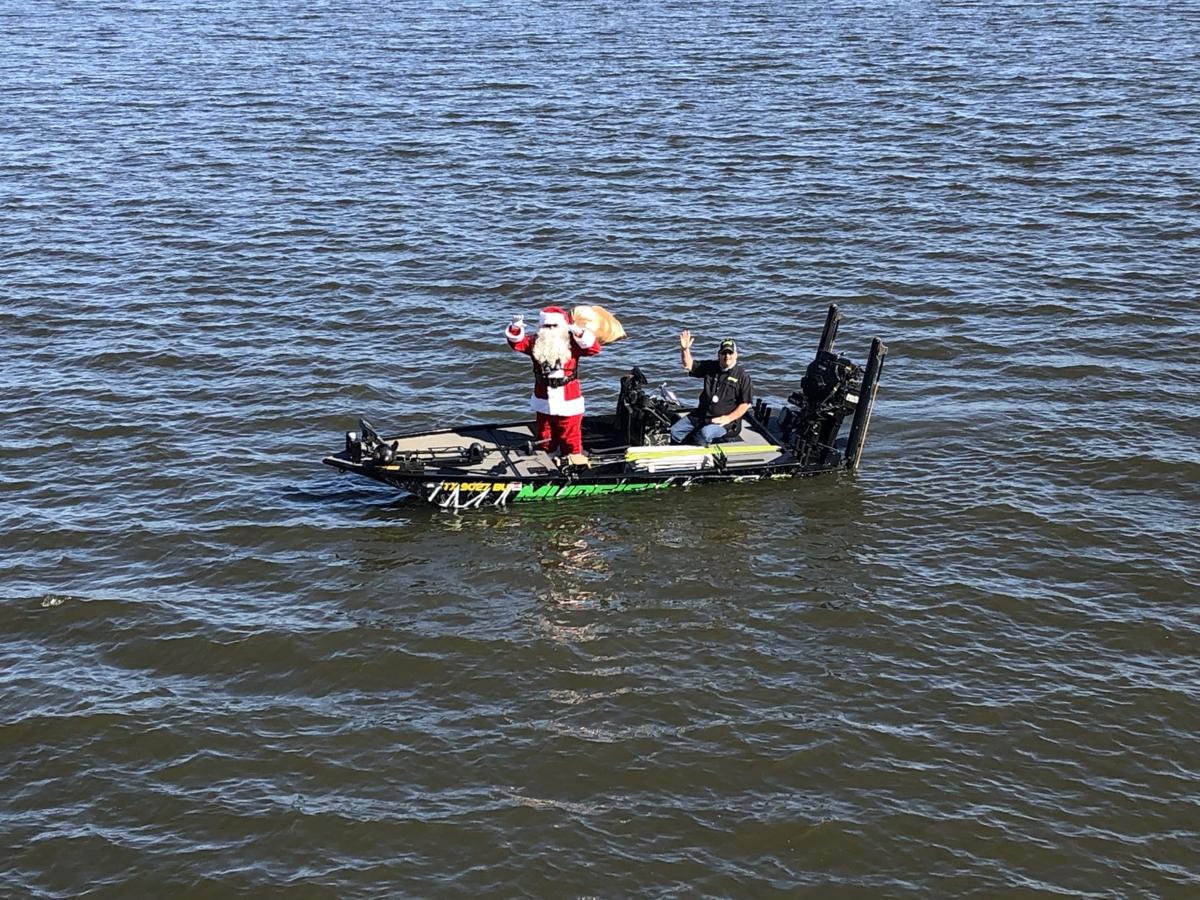 The Hemphill Lions Club Annual Christmas parade will be on December 7, 2019 at 6 p.m. The theme of this year’s parade will be “Bayou Christmas on the Bend”, a celebration of Toledo Bend Reservoir and the cities and people surrounding it.

Line-up for this year’s participants will begin at 5 p.m. at the Hemphill High School football stadium parking lot. Simply come to the parking lot at 5 p.m., see our parade coordinator and get in line. It’s as simple as that. Entries will be judged in three categories, Commercial, Non-commercial and Youth. There will be trophies awarded for the top three entries in each category. Winners will be announced and awarded their trophy at the square immediately after the parade. Businesses, churches,school groups, civic organizations, trail riders, and individuals are encouraged to enter a float, car, truck, tractor, fire truck, bicycle, boat, riding lawn mower, dog (dogs must be on a leash at all times) or just walk with your group. Decorations should be “Bayou” themed, such as gators (no real gators please) swamp moss, stumps, cypress trees and any other ideas for a Bayou Christmas. So let’s see which group or groups can really “bring it” this holiday season. Groups are encouraged to utilize small generators to “light up the night” and of course their parade entries.

Parade route will begin on Hwy 87 at the Speedy Lube and will slither, crawl or just plain proceed on down to the Courthouse Lawn.

Immediately following the parade, Santa and Mrs. Claus will exit their float at the Courthouse and make their way to Santa’s throne. Santa will hear Christmas wishes from the children, while Mrs. Claus hands out candy to the children.  Parents are encouraged to take photos of their children while in Santa’s lap.

The Hemphill Lions’ Club will be selling hot-dogs, sausages, and drinks out the courthouse lawn. Vendors will be set up around the square selling their crafts prior to the start of the parade. Come early and get in some early shopping. Anyone wishing to set up a vendor booth around the square should contact the Hemphill Chamber of Commerce for details. For more information pertaining to the Christmas parade, please contact Lloyd Williams at 409-201-0392. There is no entry fee for the parade.

A drawing for 2 boys bicycles and 2 girls bicycles will take place at the end of the evening so make sure that you go by the ticket table and get your tickets. Tickets are free for boys and girls 10 years of age or younger. The bicycles this year were donated by Lion Rebecca Felts of Farmers Insurance, Dr. Natalia Luraguiz and Sabine County Hospital who donated two. Winners of the bikes MUST be present to win.

The Hemphill Lions’Club will also be raffling off a Bushmaster AR-15 rifle and a Henry Golden Boy rifle. Raffle tickets are available now through any Lions Club member and will be sold on the Courthouse square until the time of the drawing. The drawing will be the final event of the evening. Tickets are 1 for $1 or 6 for $5. Winners do not have to be present to win. All money collected from the raffle will be donated to Hemphill Lion’s services and charities.

Don’t let this year’s parade get “bayou”. Come on out and pass a good time with some good folks. Lets get this holiday season kicked off right.

How to control your pH level – and your feminine health