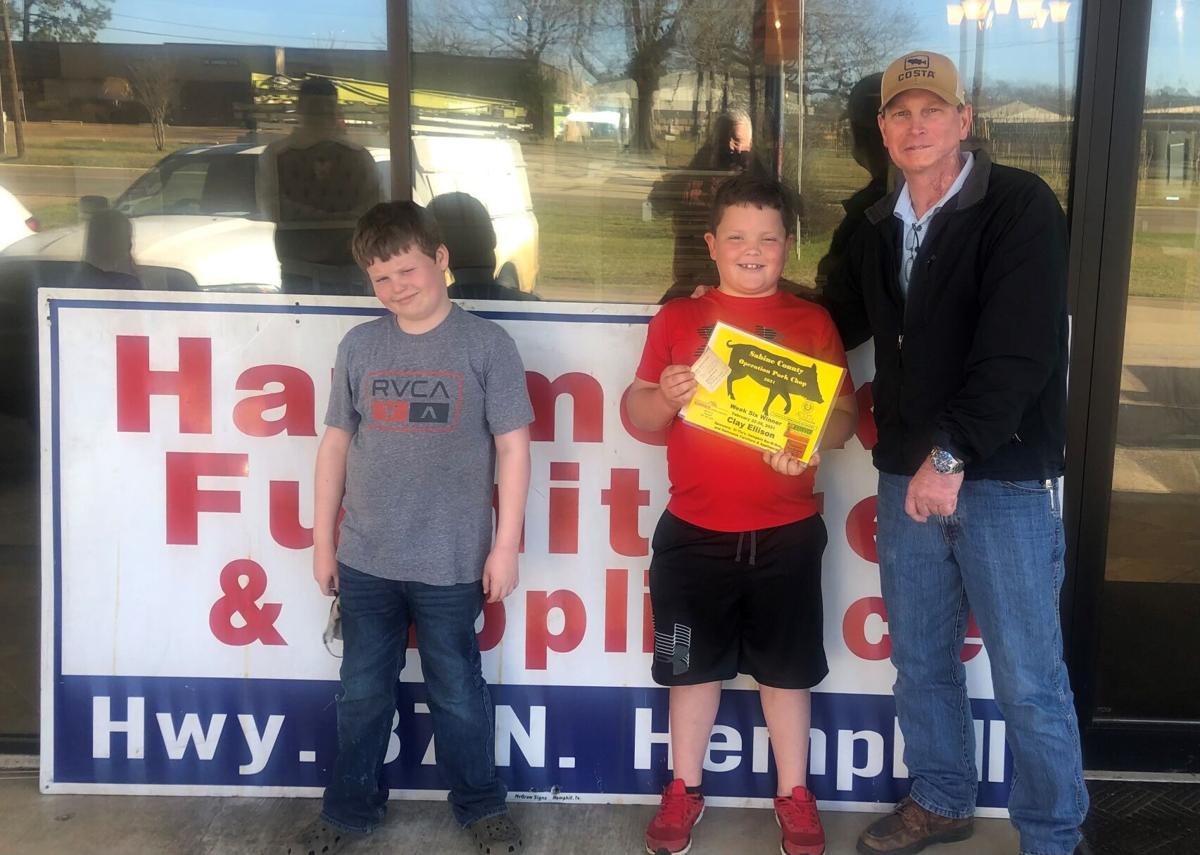 Kainan Ellison and Holden Hall (Clay Ellison’s son and nephew), receiving a check for $100 from Kirk Butler of Hammock Furniture and Appliances of Hemphill. 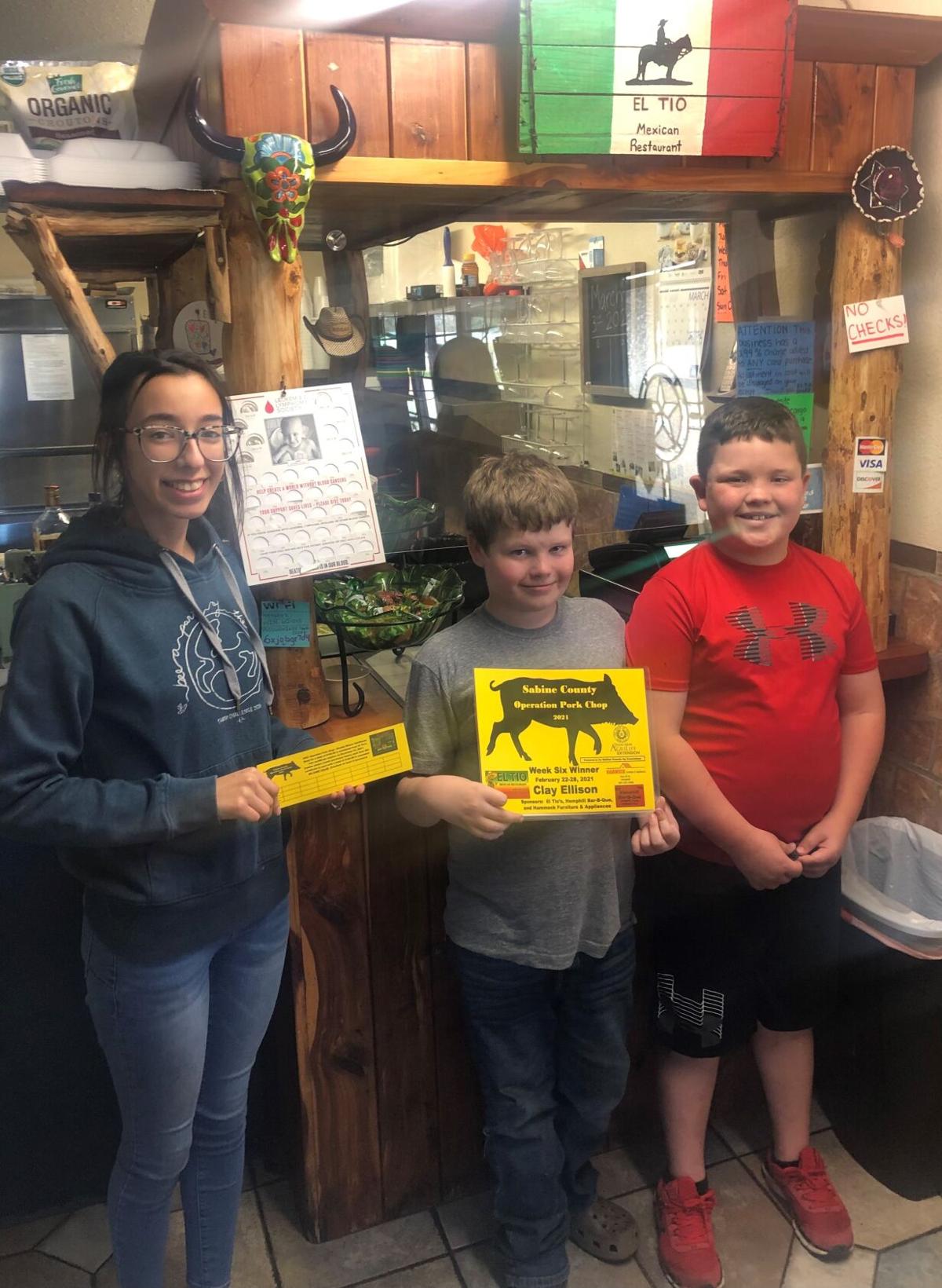 Audra Castor of El Tio Mexican Restaurant of Hemphill presenting Kainan Ellison, 9, and Holden Hall, 8, a certificate for $100 in meals from El Tio’s. 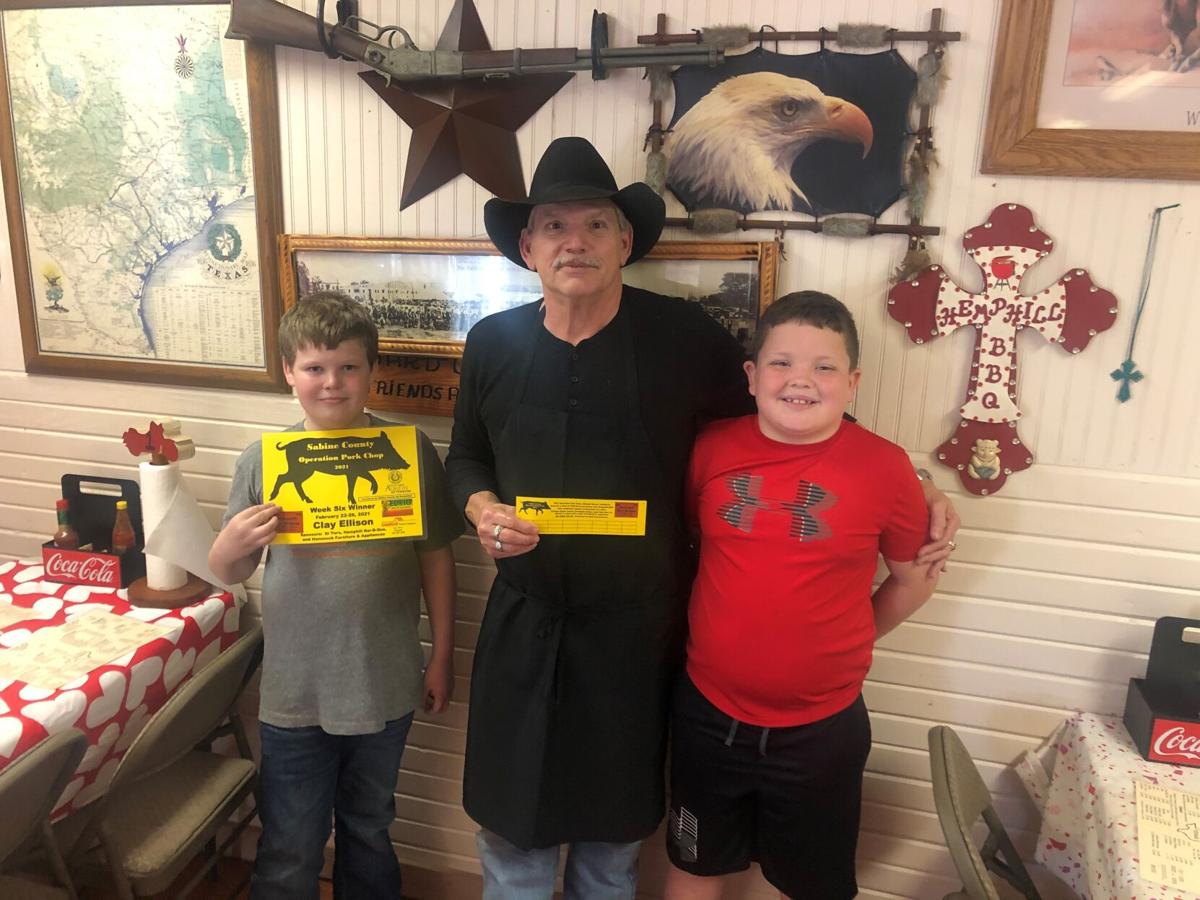 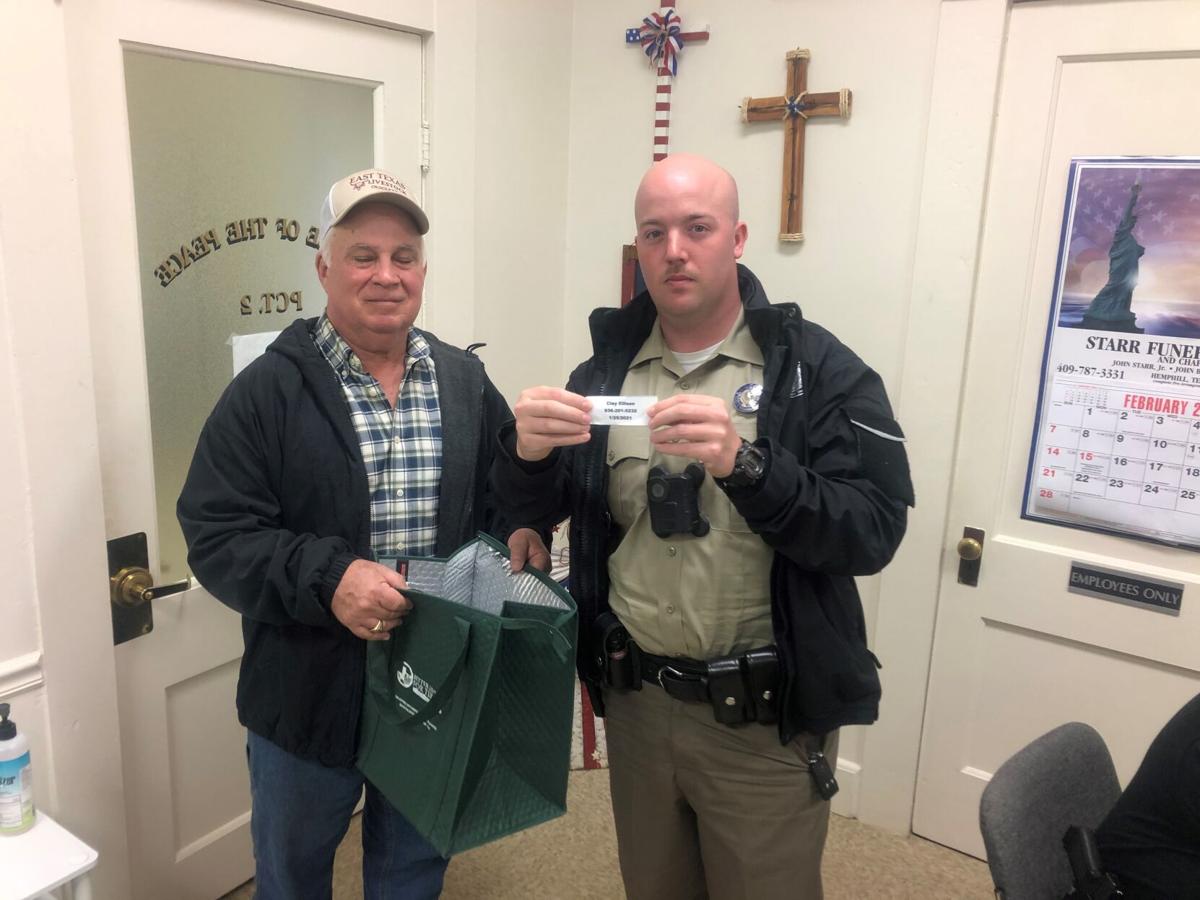 Kainan Ellison and Holden Hall (Clay Ellison’s son and nephew), receiving a check for $100 from Kirk Butler of Hammock Furniture and Appliances of Hemphill.

Audra Castor of El Tio Mexican Restaurant of Hemphill presenting Kainan Ellison, 9, and Holden Hall, 8, a certificate for $100 in meals from El Tio’s.

Hunters and Trappers are averaging 30 Wild Hog Removals per week.

Clay Ellison of the Rosevine Community won the drawing for Week Six (February 22-28, 2021) of Sabine County’s Operation Pork Chop 2021.  Clay also won the Week One drawing and is now ineligible for the nine remaining weekly drawings, but is still in the running for the Overall Hunter/Trapper prizes to be given out at the Wild Hog Supper in May.

Clay and his crew, which includes his 9-year-old son, KainanEllison, and his 8-year-old nephew, Holden Hall, removed 14wild hogs from the county population since January 18, by trapping three of them in a corral trap and baying up eleven others with hog dogs on various farms near the Rosevine and Gravelhill communities, before leaving for a construction job in Arkansas several weeks ago.

Week Six of Sabine County’s Operation Pork Chop 2021 drew 27 entries, continuing the rebound from Winter Storm Uri which shut the county down during Week 5.  The six-week total is 181.  The program will run for fifteen weeks, until May 3. Undrawn tickets will remain in the hopper for each of the next fourteendrawings.  Clay’s ticket was drawn Monday afternoon by Texas Parks & Wildlife Game Warden, Ryan Svehla.

Several thousand dollars in cash and merchandise will beawarded to hog hunters and trappers through the program which is presented by the Sabine County Ag Committee and the Texas A&M AgriLife Extension Service.

The participant who submits the most entries overall will be named Sabine County's Champion Hog Hunter/Trapper at the Wild Hog Supper on Tuesday, May 18 at 6:00 p.m.

Hunters and trappers who have no plans to process their future kills, or have their freezers full, are requested to contact Bobby Fiscus at 409-625-0211 or Terry Markle at 409-579-2182, for information on donating fresh, safe, suitable carcasses to process smoked sausage, ribs, loins and hams for the Wild Hog Supper.

Anyone who kills a wild hog in Sabine County is encouraged to cut off the end of the snout and turn it in at one of the five collection stations in the county, which include Rosevine Country Store, Pine Curtain Wild Game Processing at Midlake, Big Tin Barn in Pineland, Fairmount General Store or Markle Processing in Scrapping Valley.  Each snout, that is properly reported, earns one chance in the weekly drawings and provides data needed to improve plans and efforts to control wild hogs in the county.

Congratulations to Clay and good luck to all participants in the next drawing, which will be held weekly, until May 3, throughout the program period.

Big News For Small Towns: 5G For All

Getting Kids Started with Yoga: A Guide for Parents and Teachers

Want to go green? These 3 energy choices have big impact

Your first line of defense in home safety

Perfecting your imperfect pantry: Tips to achieve inner calm through an organized space